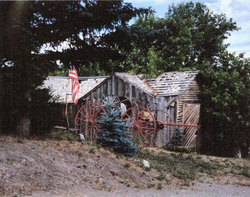 The April 24, 1879 edition of the Eureka Sentinel newspaper reported that after the April 18, 1879 fire, there was a need for another fire company. The Nob Hill Volunteer Hose Company #5 was formed to serve the Nob Hill area. There were already several other fire companies in Eureka. They were Hook and Ladder, located at the corner of Clark and Spring Street; Rescue Company on Monroe Street between Clark and Bateman; Knickerbocker, site not recorded; and Richmond, site also not recorded. Later a Chinese Fire Company was formed. There were also extra hoses stored around town in small hose sheds.

D.E. Bailey, Lambert Mollinelli and I.J. Wilson were appointed to secure a house and order the cart, hose and other equipment. It was purchased from Ott's Carriage Company, city unknown, and its arrival in Eureka generated a great deal of interest. It was stored in the Rescue Company Firehouse until the Nob Hill Fire House was completed.

According to the Eureka Sentinel, January 26, 1883, the first trip out for the new cart was interrupted when it slid on the ice as it turned onto Clark Street and a rear wheel was crushed. The 1:30 a.m. fire was at the Jackson Hotel Restaurant. A chimney fire there was described in the newspaper as quite a pyrotechnical display that lit up the whole neighborhood. Balls of fire (burning soot) and sparks were flying. The news account went on to say the "'Fire Laddies' were all there." The damaged cart was repaired at little cost and was soon back in service.

The original Nob Hill Fire House was damaged by a fire September 22, 1884. Materials salvaged from it were used to build a new one on the same site.

A fire bell was placed on a wooden tower next to the Nob Hill Fire House. According to the late Albert Biale, a Eureka native and historian, the bell had a unique tone which helped residents identify the part of town needing help. The other fire bells each with its own distinctive tone, were located at Rescue Fire House on Monroe Street and at the upper end of Main Street. Biale said there was quite a rivalry among the fire companies, especially the Rescue and Nob Hill, to see who could get to a fire first. He belonged to the Rescue company.

For uniforms, the Nob Hill Firemen chose white shirts and their belts and hats were black leather with red trim and white lettering. They were very attractive and worn for special occasions. 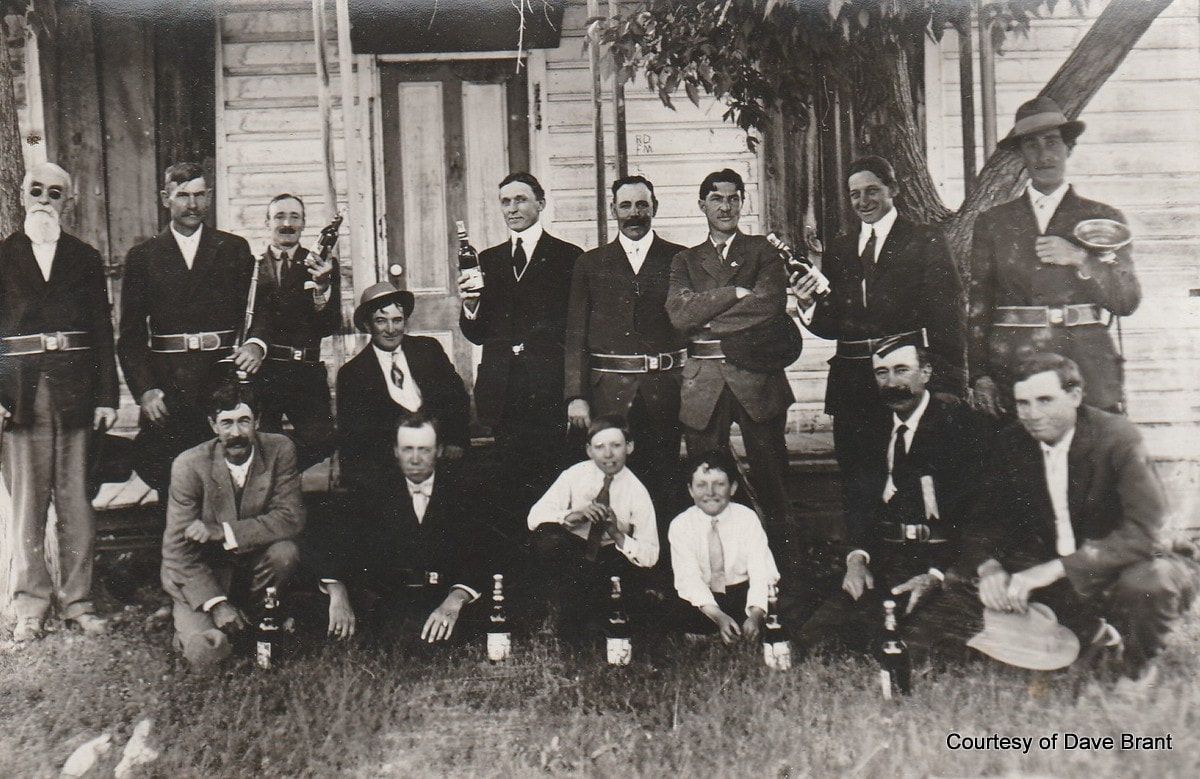 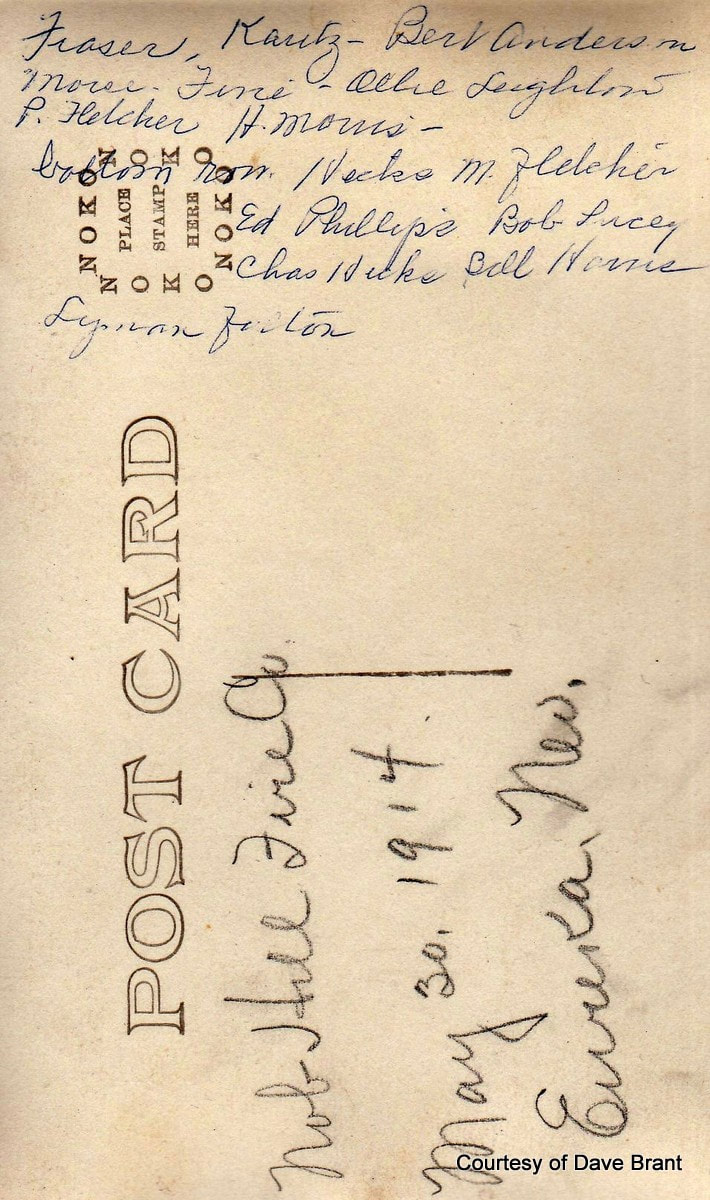 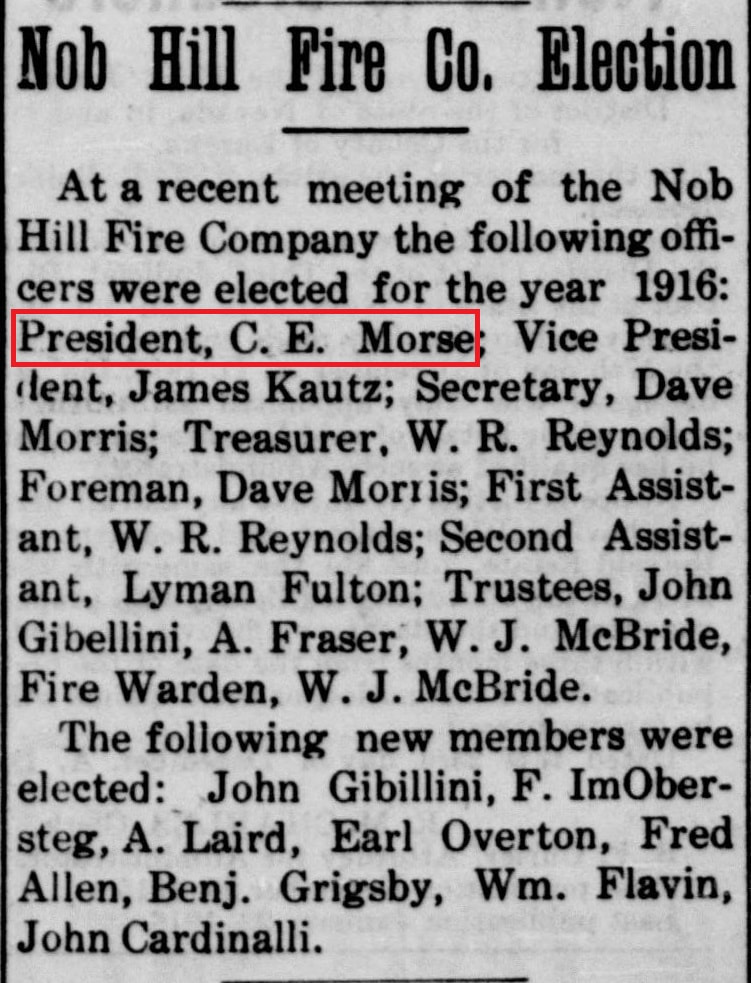 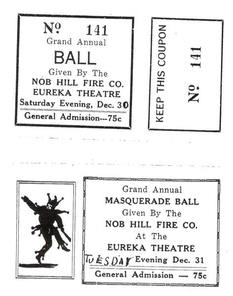 The Nob Hill Fire House was the scene of many social events through the years. It served as a meeting hall for various local groups and lunches held there were well attended. The New Year's Eve Masquerade Ball in Eureka was sponsored by the Nob Hill Firemen. It was the social event of the year and always filled the Opera House to capacity. Only those in costume were allowed on the main floor until unmasking at midnight, when winners were announced. The prizes were cash awards of $5, $10 and $15 which, according to Biale, was very good money in those days. He related that one year someone, dressed as a monkey, had everyone convinced the person under the costume was a very agile young man. The monkey climbed the poles from main floor to the balcony and actively entertained the crowd all evening. The unmasking proved it to be a lady dentist, Mabel Young, of Eureka. Albert Biale and his wife, Marie, won first prize one year, when they dressed as a Russian Count and Countess. Biale said Marie looked very nice, but he felt quite strange in his satin pants and buckled shoes.

The fire companies were the social backbone of Eureka. In addition to the New Year's celebration. they marched in all the parades and sponsored the 4th of July celebration. 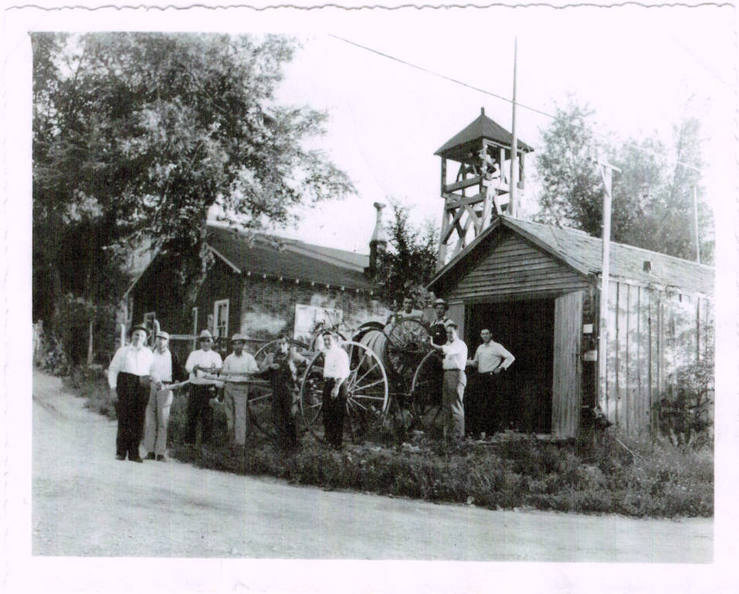 At first, the fire carts were handled by manpower as they responded to a fire, and the hills in Eureka were always a challenge for the men pulling the equipment. As cars and trucks became available, they were used and this speeded up the response time to fires.

The various fire companies were eventually organized into one group called The Eureka Volunteer Fire Company. The equipment was slowly improved, with the first fire truck, build on a one-ton Model T chassis, obtained in the 1920s. It was equipped with a soda acid tank and about 50 feet of hose. In 1957, Albert Biale, Delbert Robinson and Ronald Hicks went to Ogden, Utah, and purchased a used La France Fire Truck. Next a tanker truck was added. Practice sessions were held once a year when a Nevada state instructor came to Eureka.

The Eureka Volunteer Fireman built a fire house on the site of the old Rescue Fire House on Monroe Street but it was only used for meetings by the firemen and other civic groups. A large building at the lower end of Main Street housed the trucks and equipment.

The Nob Hill Fire House sat idle for many years, but its alarm box and tiny red light remained in use if needed to sound the fire alarm. Finally, the bell tower was dismantled, as a safety measure, and the bell, along with the Rescue Company fire bell, was placed on a platform in front of the Court House on Main Street. They often ring out, as admirers can't resist hearing them. The Nob Hill Hose Cart was removed and stored away with other artifacts.

In 2002, the Nob Hill Fire House was one of only two that had been built for hand-drawn carts remaining in the state. In spite of efforts to have it restored, it was finally necessary to remove it. John Laird, a native Eurekan, and his friend, Darrell Asay, both of McGill, made many trips to Eureka to dismantle the building. The Eureka Sentinel Museum was given first chance at the remains and then-curator Colleen Nielsen, assisted by Frank Abercrombie and Connie Hicks, hauled what they wanted to the museum. Nielsen created an exhibit from the old wood, shutters. windows, one door, a portion of the roof and even a part of the stovepipe. Many photos, old paraphernalia, uniforms. hats and belts were included in the exhibit. Laird made a frame from some of the lumber for a colored photograph of the fires house in its original setting. This was placed in the museum exhibit. He also made a clock, from the wood. that resembles the old fire house and bell tower. 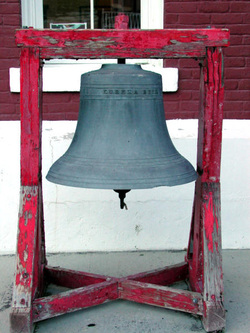 Eureka is still served by a volunteer fire department. In addition to their official duties, members sponsor the 4th of July street fireworks display and sometimes a dance. The members are up early on July 4 to fire a sunrise salute and the fire siren still greets the New Year at midnight every year. Margie McKay Hammond kept this tradition alive for nearly 60 years. She was assisted by Arlene Merialdo DePaoli for 50 years, up until 2000 when they rang in the Millennium.

The Eureka County Commission recently approved a new $3.5 million fire house on Main Street. The museum portion of the new building displays the old fire carts, hose carts, uniforms, hats, equipment, and memorabilia. Both the photo and clock made by John Laird will also be displayed in there.

The Nob Hill Volunteer Hose Company #5 is gone, but will not be forgotten. As Albert Biale said, "They were the shakers and the do'ers."
Author Connie Hicks is a long-time resident of Eureka.  She has been instrumental in helping preserve area history and has written many articles and stories about old Eureka.