"I am the grand-daughter of Christye Fulton MacGillivray, whose mother Mary Fulton, raised her children in Eureka after her husband died from black lung fever there in the 1880s.

Christye (then Christina) was a school teacher in Eureka (taught Albert Biale) and Round Mountain. My grandfather was a mining superintendent and then started a freight company (horses and wagons). He died very young and is buried in the Odd Fellows Cemetery.  My mother, Inez MacGillivray Peper, was raised in Eureka and Round Mountain until 1926 when all moved to Reno. My great uncles were Rudy Zadow, who had the People's meat market and Lyman Fulton, who until more recent years, was the youngest man elected to the Nevada State Legislature.

Here is a link to a copy of the story my mother wrote of her childhood in Eureka.

Download File
The house where she grew up still exists –at the corner of O’Neill and Sadler, as does the stone henhouse behind it, and the house my grandmother bought as a wedding present for my aunt – I think boarded up now, a substantial brick house on Nob Hill—the photo I include here has my mom on the porch of that house. The other photos with doll buggy and Uncle Jack are in the front yard of the house on O’Neill, looking toward Main Street.
Click on photos for larger views.

Inez MacGillivray, at age 3 in 1918 , holding Teddy, an original Steiff bear, that she kept all of her life and still resides in the family.

Fred Zadow, son of Rudy and Sophia Zadow the year he was born 1910.

Jack MacGillivray, holding his niece (my mother) , Inez Fulton MacGillivay, taken in 1917 when she was almost 2. Inez’s father was Angus (Mac) MacGillivray, who died of Rocky Mountain Spotted Tick fever. Angus and Jack were known for winning the local double-jacking competitions, drilling holes in solid rock to pack with explosives.

Inez MacGillivray, age 4, 1919. Photo was taken just south of the 'Doll House' at the highest point on O'Neil Avenue, looking to the south. The doll buggy and dolls are still in the family.
Below: Rudolph Zadow, taken June 8, 1907---on Bateman Street in Eureka. He is driving the butcher wagon for People’s Market. 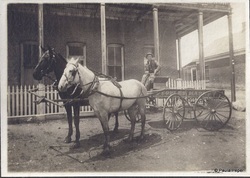 Rudolph Zadow
My grandmother, Christye Fulton MacGillivray taught out at Damele’s Ranch for one season (they hosted her for all the kids surrounding, but the school year was only 4 months and she needed more work), then to Beaver, and ultimately Round Mountain. They would return to Eureka every summer to stay with Mary Fulton in Eureka. Ultimately, my mother attributed her own being able to go to college at the University of Nevada, Reno, to the fact that Grandma was the first white teacher to accept anyone who came to her school in Round Mountain---most of Mom’s fellow students were Indians. Grandma received money per student for teaching. Mom ended up being one of a few white kids in the classroom---but Grandma received extra money for the number of students she taught. That money sent my mother to college ($200/yr). When Mom was dying and I had fulltime care for her, she would recite the names of those Indian children to me and tell me that they taught her how to love the land. My sister and I still have the baskets that the Indian families gave to my grandmother. " 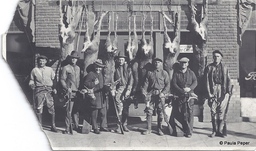 Hunters 1913
Hunting season, around 1913
The rifles: 3 Remington Model 8 semi-auto, 2 Winchester lever action 1894 or
similar models, one bolt action.
Below are photos from a July 4th Parade. They are from an envelope labeled in my Grandmother Christye's handwriting "July 4th Parade 1913 or 1914."
Click on photos for larger views. 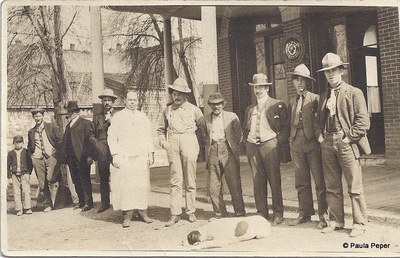 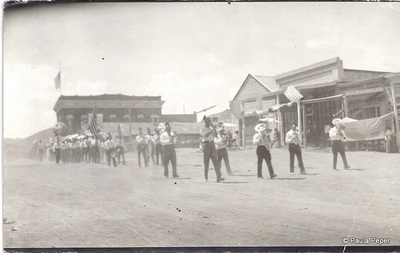 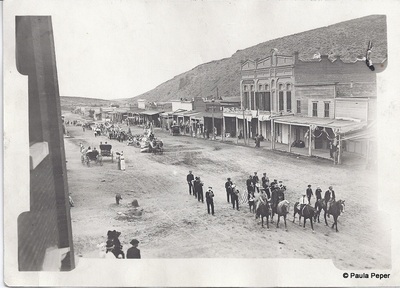 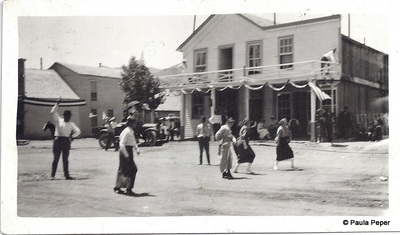 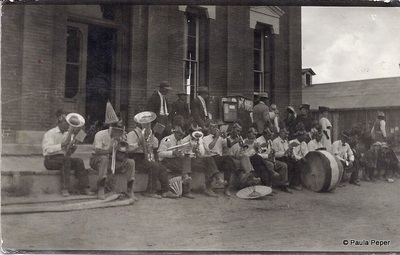